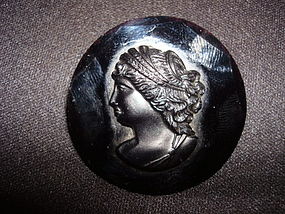 Nice early 1900's black amethyst glass cameo mounted on a metal backing. This vintage pin is in nice condition and measures 1 1/2" in diameter. It features a raised cameo bust mounted on a circular background that has a faceted rim. This cameo is made of black amethyst glass and is attached to a metal back with an early style pin clasp. A nice early 20th Century Cameo!!!
Similar Items from this seller